My tomatoes have been doing great.  I was nervous for a while there because many of the leaves and stems on several plants were yellowing but after a healthy dose of additional compost and then some liquid Dr. Earth fertilizer a week later, they seem to have perked up.  They are all planted in containers and therefore need a supply of nutrients to replenish those that leach out after watering.  Oddly enough, the tomatoes planted in the enormous half wine barrels seemed to suffer more than those planted in smaller 5-gallon pickle buckets!  Go figure.

I was just glad they all recovered and we’ve been enjoying plenty of Sun Gold tomatoes from an out-of-control-happy seedling I got from Elaine over at Bucolic Bushwick a few months back – thanks, Elaine!  Principe Borgheses have also been delicious, and we’ve had plenty of decent yellow pear tomatoes.

We’ve had our eyes on the Mortgage Lifters, which are starting to turn pink now, and on the San Marzano plum tomatoes, which look absolutely gorgeous…at least they DID until yesterday, when as I bent down to pick some weeds from another container I noticed a dark spot on the bottom of one of the plum tomatoes…and then another…and then another. 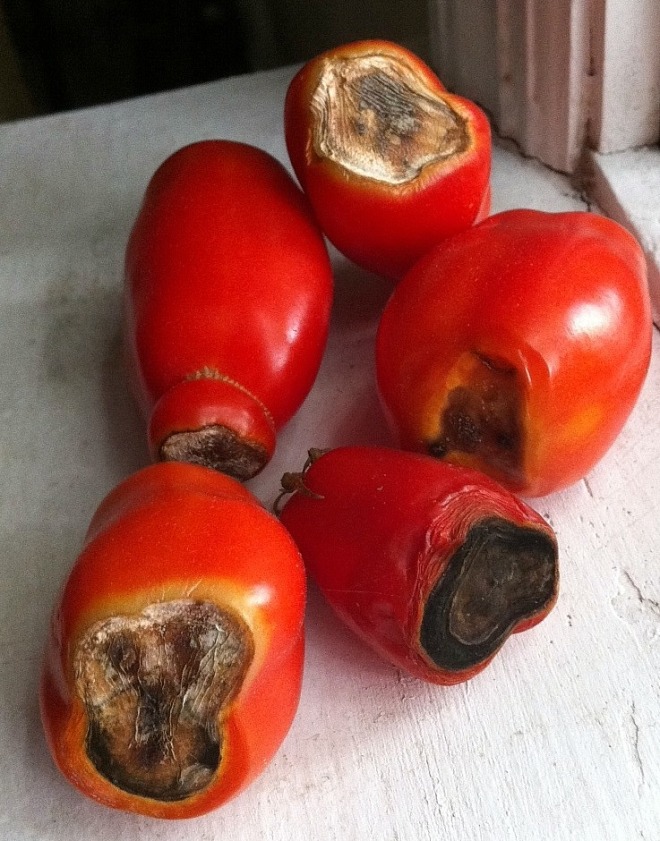 I know a little about blossom end rot and that it has to do with an inconsistent supply of water which affects the plant’s ability to draw up calcium when it needs it.

I can’t really understand why this plant has been affected but not the others (I HOPE the other larger tomatoes will be okay!)  They are all on the same watering schedule which is basically every other day (unless it’s REALLY hot like last week, in which case I watered every day.)

I soak the mulched soil (not the plants) all around just until I see the first drops of water coming out the bottom of the barrels, which are raised up on casters for mobility as well as for drainage.  The bottom quarter of each barrel is also filled with styrofoam packing peanuts for additional drainage.

I’ve read of a few cases where people’s plants recovered and went on to produce healthy, BER-free tomatoes.  Boy oh boy do I hope that’s the case here.  I was hoping to can some of these guys or have Mr. B make some of his amazing tomato sauce for canning.

The afflicted tomatoes were removed in hopes of the plant being able to recover and put its energy into healthy fruit.  All fingers and toes are crossed that the Mortgage Lifters will get by unscathed.

Anyone out there have any experience with this?

15 thoughts on “The Dreaded Blossom End Rot Has Struck.”

Other Blogs I Love